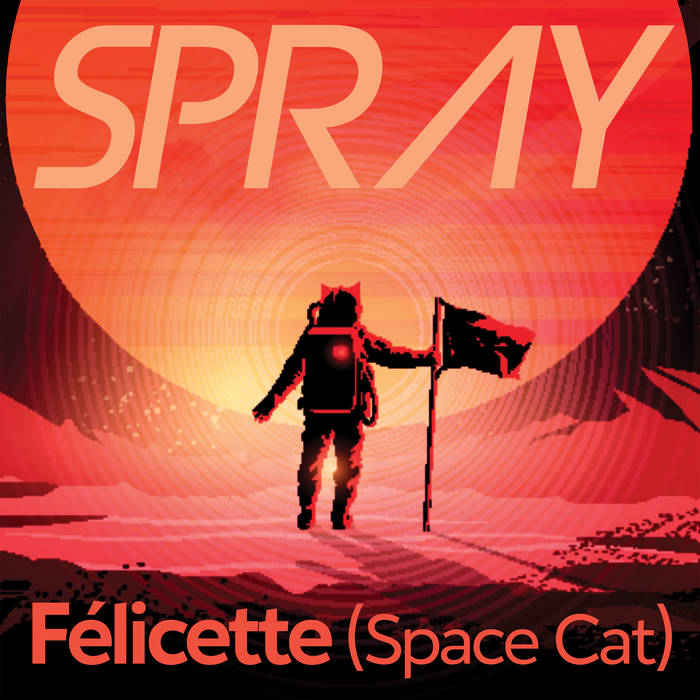 The words “chameleonic, inimitable and irrepressible indie-pop duo” can be readily used to describe Spray. Fans of Jenny McLaren (vocal, guitars) and Ricardo Autobahn (synths) that have followed the duo in various guises from Festive 50 topping adventures as The Cuban Boys, through to Eurovision adventures and collaborations with Daz Sampson (which included getting Glenn Campbell to sing on their version of Rhinestone Cowboy) and more would probably add the term ‘national treasures’ to that long list of accolades.

Not content to be creatively shackled by world events in 2020, Spray have used the time to perform online gigs, release the Offerings from the Algorithm EP and a 10th Anniversary Edition of their classic single Everything’s Better With Muppets, educate and entertain us with a series of behind the scenes how to guides for making hit records, tease the release of new material and introduce Spray’s mum to the world; all under the banner of hashtag #SpraySocialMonday (though to tell the truth, we are not sure that was ever confirmed). Next up, Spray release their new single Félicette (Space Cat) on the 18th of June, 2021 via AnalogueTrash.

New single Félicette (Space Cat) seems an unlikely, but at the same time, very Spray song title. While the whole world is familiar with the story of Laika the dog being the first animal to be sent to orbit the earth in 1957, very few are aware of the feline launched into space as part of the French rocket program.

“Basically, I bought wine that had cats in space suits on the front” says Jenny, “as this is pretty much how I choose my wine (it's rare I meet a wine I don't like). On reading the back of the wine bottle I discovered Félicette, who in 1963 became the first (and only) cat who went into space and had been pretty much forgotten about in the history of space travel. I then did a bit more research online, finding out that there was a Kickstarter to make a statue for her which was unveiled at the International Space University in Strasbourg in January last year.”

She continues “I also discovered that she had been named Felix and thought to be male for some time (down with the patriarchy!), that she had been chosen out of a group of street cats as she had put on the least amount of weight during the training and had been put to sleep after returning her craft successfully so they could examine her brain. To say there were tears while researching this song is to put it lightly, not just down to the copious amounts of Félicette wine that I had to drink.”
The single is supported by another new track Being a Playa Ain’t Easy, Dog which is exclusive to the B-side of the 7” vinyl picture disc – a soaring piece of synthpop, anthemic in construction with a glorious nod to Giorgio Moroder and delivered with Jenny providing an enticing bluesy vocal.

“We wanted to provide an exclusive, non-LP, non-digital, never-to-be-reissued B-side for the 7" single, like bands did in the olden days” says Ricardo. “Being a Playa Ain't Easy, Dog - a condemnation of the kind of privileged groups who consider themselves victims and any criticism of them as persecution - seemed very topical in these days of idiots like Laurence Fox. We wanted to get it out as quickly as possible. As the character in the song says, ‘I've got serious underlying aggression issues, I get inconvenience and oppression confused.’ Both sides of the song also showcase our new old-skool sound; rather than using computers and soft synths, all the songs on the new album were written on analogue synthesizers.”

It’s another piece of pop perfection from Spray, and with talk of a new album later this year and hopefully some live gigs, the outlook for the second half of 2021 is already looking brighter. If only all pop music was this good!